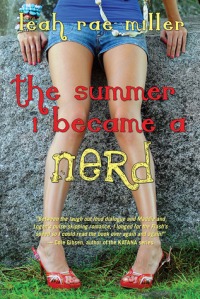 Title: The Summer I Became a Nerd

Source: Entangled Publishing, LLC on NetGalley (A copy of this book was provided to me in exchange for an honest review.)

On the outside, seventeen-year-old Madelyne Summers looks like your typical blond cheerleader—perky, popular, and dating the star quarterback. But inside, Maddie spends more time agonizing over what will happen in the next issue of her favorite comic book than planning pep rallies with her squad. That she’s a nerd hiding in a popular girl’s body isn’t just unknown, it’s anti-known. And she needs to keep it that way.

Summer is the only time Maddie lets her real self out to play, but when she slips up and the adorkable guy behind the local comic shop’s counter uncovers her secret, she’s busted. Before she can shake a pom-pom, Maddie’s whisked into Logan’s world of comic conventions, live-action role-playing, and first-person-shooter video games. And she loves it. But the more she denies who she really is, the deeper her lies become…and the more she risks losing Logan forever. (Source: Goodreads)Maddie’s always been a bit of a nerd, but she’s afraid people will find out so she’s been leading a double life. She pretends to like what she’s supposed to like and never tells anyone that she likes comics and sci-fi. And then one summer she slips up and all the lies come tumbling down around her. It leads her to The Pheonix comic shop and the cute nerd who works there, Logan, and to a life of freedom.

I kind of groaned my way through the first third of this book. It was so cheesy and predictable. Eventually it became a little more fun, but it remained predictable throughout. My biggest issue is just how weird it is that this idea of nerd culture as somehow other is still prevalent when comic books, superheroes, and nerd-dom are all over pop culture these days. Despite that this book is as predictably cute as I expected, it was a good summer read if a little heavy on the fluffy nothingness that often comes from these teen romances.

Maddie’s whole secret life plot is just…stupid in my opinion. I get that it’s what leads the book but it is dumb, nerd culture is everywhere and it isn’t something people can really look down on anymore. I don’t know a single person who hasn’t touched a comic, seen a superhero movie, or enjoyed a morsel of sci-fi at some point in their life. Things like LARPing and D&D are still sort of looked down upon but Maddie doesn’t get into that until well into this book so why is she hiding? The notion of hiding your nerdiness seems so out of date.

The whole book was predictable from plot to characters. They’re all pretty stereotypical but honestly that’s kind of what I expected out of this book so I’m not complaining. I liked Logan though he was pretty mopey. Maddie was kind of dithering mess, I was not overly fond of her, but she was alright. I thought they had great chemistry though. I also like Logan’s friend, Dan, and his sister, Vera.

This is probably not the best book of this type. There is another, Into the Wild Nerd Yonder, that I enjoyed significantly more than this one. Though this book was fun in the end. This is a good summer read, something great for the beach or relaxing at home so, sure, give it a read. There’s nothing really wrong with it (except for the terrible cover), it just isn’t amazing.

Have you read The Summer I Became a Nerd? Let me know your thoughts in the comments!
Check out Leah Rae Miller at her Goodreads, website, and Twitter.
Connect with me on Goodreads, BlogLovin, and Twitter.

One thought on “ARC Review: The Summer I Became a Nerd by Leah Rae Miller”