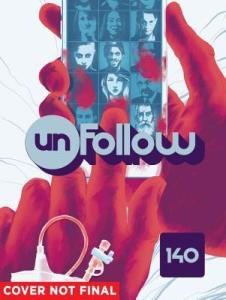 Source: Vertigo on Edelweiss  (A copy of this book was provided to me in exchange for an honest review.)

A dying social media mogul leaves his billions to be split evenly between 140 random people–or however many of them are still alive at the moment of his death. Rob Williams (MARTIAN MANHUNTER, THE ROYALS: MASTERS OF WAR) and Michael Dowling (Death Sentence) assemble a cast that includes a young black man trying to get by in St. Louis, an Iranian reporter in need of hope, a retired special forces soldier with a strange sense of purpose, and a thrill-seeking heiress, in this thriller that shows we’re all still part of the food chain. (Source: Goodreads)

A dying social media billionaire leaves his fortune to 140 random people from around the world. The trick is that as each member dies the fortune of the rest will increase. The ensemble cast must fight to survive the 140 both if they want to make their fortune.

I absolutely loved Vertigo’s Sandman and Fables but I’ve struggled to find other Vertigo series that really worked for me. New Romancer, another new Vertigo series, did nothing for me so I was a little on the fence about Unfollow. On top of that it’s a little more gory and grim that most other comics I typically reach for, but I was stunned by this series. It’s really interesting, with some social commentary obviously, and art that I thought really suited the content well.

Unfollow primarily focuses on a few characters. One is a young black man who’s trying to make money to take care of his sister. There’s another American, a young heiress and thrill seeker. An older man who is a war veteran who comes prepared for battle. An Iranian war correspondent who is asked to document the entire social experiment. And a Japanese writer whose work inspired the experiment. I thought all of these characters were compelling and I enjoyed the way their lives intertwined because of this situation.

I think the book aims for some social commentary about what exactly people are willing to do to make their fortune. There’s all the inescapable interconnectedness of social media. Beyond the social commentary though, there’s an element of fantasy and magic to all of it as the characters seem to frequently hallucinate these large cats, something that hasn’t been explained but that intrigues me now even days after reading the book.

I think the art is suitable for the content, and I also think it’s very good. The style is a little rough and works well with the force and harshness of the content. I think the character designs are all quite good too. I’m especially fond of Akira, the Japanese author. He has these prosthetic, robot legs and a face tattoo and I’m just quite fond of the design.

I think this book has the edge and raw realism that I like in most Vertigo stuff with that twist of the fantastic that is ever present as well. I think it does make me think of Sandman and Fables in some ways because of that sort of grit and unashamed rough look at people. I would actually really like to read more and I expect I will when the next trade comes out.

Have you read Unfollow Vol. 1? Let me know your thoughts in the comments!
Connect with me on Goodreads, BlogLovin, and Twitter.