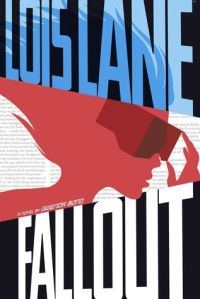 Army brat Lois Lane has moved more times than she can count—and has caused just as much trouble righting wrongs no one else seems to notice. Now that her family is in Metropolis for good, though, she’s decided to fly straight. Unfortunately, it won’t be that easy. A group known as the Warheads is tormenting a girl at school, messing with her mind via an immersive video game they all play. Not cool. Armed with her wit and snazzy new job as a reporter, Lois is determined to help. But this isn’t just a case of cyberbullying—something seriously creepy and dangerous is going on. Thank goodness she can always count on her maybe-more-than-a friend, a guy she knows only by his screenname, SmallvilleGuy… (Source: Goodreads)

Lois Lane has been moving from army base to mary base all her life, never making roots or friends. There’s one exception, her best friend, who she only knows by his screen name – “SmallvillleGuy”. All her life she’s been making trouble knowing she can escape it in her next move, but when the Lanes settle in Metropolis permanently Lois decides on a new plan for her life – she’s going to be good, make friends, and not cause problems for her family. Everything goes wrong when she sees a girl getting bullied and her sense of justice completely takes over. With a job at the Daily Scoop, the Daily Planet‘s teen branch, she plans to uncover the truth behinds the bullying because something about it feels strange.

I was a little skeptical about this book when I first heard about it. I think some of my reservations were right, but mostly I was really wrong. This book was so much fun, and a really interesting look into Lois as a character beyond her relationship with Superman. (Of course Superman is still there in the form of teenage Clark Kent – SmallvilleGuy.) I thought the mystery was exciting and interesting, and while the writing wasn’t amazing, I think Bond really made something amazing out of Lane, giving her much more depth than I’ve ever really gotten from her before.

Lois is a really strong protagonist. She has an incredible sense of right, and the way she fights for not just herself and her friends, but for anyone who has been wronged is amazing. She really embodies the ideals of Superman but she doesn’t need to be an alien or a superhero to protect those ideals she’s just an ordinary teenager who wants to do right. I liked how Bond really highlighted how these characteristics of her personality make her into the journalist that she would become as an adult. I am incredibly fond of this version of Lois who doesn’t need Superman to lead her and protect her, sure they’re friends and he helps her when she’s in need but she can and will fight all of her own battles.

The mystery of this book is both grounded in reality through the bullying and cyberbullying, but also draws on the sci-fi aspects of the comic book world that set the DC Universe apart from us. The bullying was realistic and heartbreaking to watch Anavi suffering through. The background of it – mind control and advanced technology beyond our own – made it that much more interesting to read about and delve into. I really thought Bond captured something interesting. The mystery was really well written, while I kind of predicted it I was still on the edge of my seat wondering how far things would go, would the military be involved? Does Lois’s dad already know? What exactly is the principal’s deal? It was really gripping and complex and I loved it.

There’s a pretty strong cast of characters in this. Lois’s coworkers at the Daily Scoop are really all pretty great. Of course the stand out is SmallvilleGuy, who we never really get to see or learn what his real name is but of course you can read into that. The pair meet on a chatroom about alien encounters – the alien Lois encountered? Totally Superman. Which was a really cute nod to their future.

Overall I thought the book was really fun. I thought Lois was well written and well developed. There was some trouble with the writing being a little repetitive and bland sometimes but in general it was quite good. There were 2 little preview chapters that get cute nods in the book too, that you can read here and here. All in all this book was definitely worth a read if you’re a comic book fan. Can’t wait to read the next one!

Have you read Lois Lane: Fallout? Let me know your thoughts in the comments!
Check out Gwenda Bond at her Goodreads, Twitter and website.
Connect with me on Goodreads, BlogLovin, and Twitter.