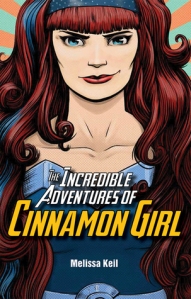 Source: Peachtree Publishers on Edelweiss  (A copy of this book was provided to me in exchange for an honest review.)

Alba loves her life just as it is. She loves living behind the bakery and waking up in a cloud of sugar and cinnamon. She loves drawing comics and watching bad TV with her friends. The only problem is she’s overlooked a few teeny details. Like, the guy she thought long gone has unexpectedly reappeared. And the boy who has been her best friend since forever has suddenly gone off the rails. Even her latest comic book creation is misbehaving. Also, the world might be ending– which is proving to be awkward. As doomsday enthusiasts flock to idyllic Eden Valley, Albas life is thrown into chaos. Whatever happens next, its the end of the world as she knows it. But when it comes to figuring out her heart, Armageddon might turn out to be the least of her problems. (Source: Goodreads)

When a YouTube video predicts the apocalypse is coming Alba’s world turns upside down. And it might be exactly how she likes it. Now her friends, who were all planning to leave for university, are stuck in town waiting for the apocalypse, and a long lost friend returns home. Things are back to the way they were before. But Alba starts to feel panicked and lost, especially as she can’t figure out just what it is she wants to do if the world doesn’t end on New Year’s.

I’m sorry to say that Cinnamon Girl‘s adventures were not so “incredible”. I found this book a chore to read, which is unfortunate because the apocalypse as metaphor for growing up is kind of a clever idea. That’s about the only clever thing in this book though. The writing was dull and ramble-y, the characters are motivated by forces unknown and unseen (since we never really get a smidgen of information about their backgrounds that is of any importance), there’s a tedious amount of pop culture, “nerd” references spattered throughout the book, and the romance is totally flat.

The story doesn’t ever really lead to any apocalypse, a lot of what happens if dragged out depression and contemplation on the part of Alba. A lot of what’s going on in her mind we’re not exactly privy to, we get monologues and introspection that doesn’t really crack the shell of who Alba is or what she’s about. The biggest thing affecting her life seems to have been her father’s death, which happened when she was a kid, and now she’s just stuck. She is an adult stuck at age 10 unable to move forward with her life. We don’t find out about any of this until the very end of the book, which means you’ll struggle through 250 pages before you actually get to any of this. Even then we don’t really get to look into her mind.

Alba is uninteresting and poorly developed. As I’ve mentioned we don’t really get any deep looks at her until the very end. She’s very one note – she likes comics. We get so many tedious comic book references in this book it’s cringeworthy. It feels as though Keil did a sort of “[insert title here]” system and then listed off the comics she was aware of. She references them frequently, often in ways that don’t make sense in the context. She doesn’t even seem to know what the comics that she references are. This is basically all we get of Alba for most of the book. She doesn’t have emotions or opinions, she’s just a walking comic book list.

There are a long list of characters in this book, but honestly I can’t remember any of them. They come into the book like a tornado, never getting proper introductions or development. And yet we’re meant to care about them and feel like they’re out best pals. Nope, didn’t work. The romantic interests are even worse though! There’s 2 of them, of course, and there’s no chemistry whatsoever with either of them! Grady and Daniel are 2 of the least interesting characters in this whole book in my opinion.

Overall I just felt like the whole book was flat, a bore, and very tedious reading. I would not recommend this book.

Have you read The Incredible Adventures of Cinnamon Girl? Let me know your thoughts in the comments!
Check out Melissa Keil at her Goodreads, website, and Twitter.
Connect with me on Goodreads, BlogLovin, and Twitter.

One thought on “ARC Review: The Incredible Adventures of Cinnamon Girl”