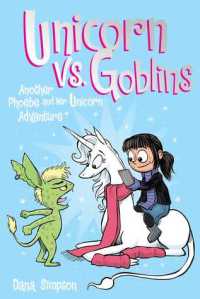 Source: Andrews McMeel Publishing on NetGalley  (A copy of this book was provided to me in exchange for an honest review.)

School’s out! That means no more teachers, no more books, and lots of time to compliment Marigold Heavenly Nostrils on her good looks. In this third volume, Phoebe and her obligational best friend, Marigold, learn that summer still has plenty of surprises for the both of them. All of our old friends are back—Phoebe’s part-time “frenemy” Dakota, upon whom Marigold has bestowed sentient hair, Phoebe’s goofy parents, and even Lord Splendid Humility (but please, ignore his magnificence if you can)! Have fun as Phoebe and Marigold continue the “Phoebegold Detective Agency,” spend a week at Wolfgang Music Camp, and find themselves in more misadventures, thanks to Marigold’s enchanted sparkles! Along the way, Phoebe makes some new friends, such as Sue—her unique clarinet-playing bunkmate, Florence Unfortunate Nostrils, Marigold’s estranged sister, and Camp Wolfgang’s lake monster who enjoys tacos and Wi-Fi. When school resumes, read along as Phoebe enjoys (or suffers from) a brief case of popularity, mentally catalogs her grievances against dodge ball, and, with Marigold’s help, rescues Dakota and her hair from the queen of the goblins. Through these wacky adventures, Phoebe and Marigold learn that their friendship is the second most magical thing of all, after Marigold’s beauty, of course. (Source: Goodreads)

Phoebe and her pal, Marigold, are back in the third volume of the series. This time they’re taking on camp, making friends, and also goblins! Phoebe’s frenemy is back with her magic hair, and we see some great cameos from Phoebe’s mom and dad!

I really enjoyed this installment of the series, I read the whole thing very quickly. This series continues to improve and strengthen the longer it goes on. This trade felt like a really solid unit that flowed really well, while previous ones felt less connected. I thought the storylines were also a little clearer and more well formed. This series just grows on you the more you read of it.

I really enjoyed it, though honestly I’m still not super sold on it, I think I just feel a little too old for it. Though I suspect I would absolutely love reading this with a kid if I had one. I definitely think it’s a great book for kids and parents to bond over. Definitely check out the other books Phoebe and her Unicorn and Unicorn on a Roll.

Have you read Unicorn vs. Goblins? Let me know your thoughts in the comments!
Connect with me on Goodreads, BlogLovin, and Twitter.