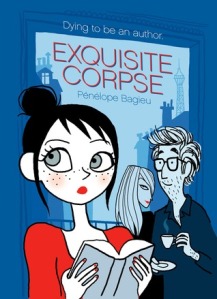 Zoe isn’t exactly the intellectual type, which is why she doesn’t recognize world-famous author Thomas Rocher when she stumbles into his apartment…and into his life. Zoe doesn’t know Balzac from Batman, but she’s going to have to wise up fast… because she’s sitting on the literary scandal of the century! (Source: Goodreads)

Zoe isn’t happy with her life, she hates her job, hates her boyfriend, but she doesn’t have any goals. Then she meets Thomas and everything changes. Thomas makes her feel safe, and she makes Thomas able to write again. Zoe doesn’t know anything about Thomas, and when it turns out her has a dark secret Zoe goes from feeling safe to feeling something else entirely. Can Zoe finally find something to make her happy?

I’ve been really excited about this book ever since I heard about it. I never actually got around to buying it until recently, and now I wish I’d done it sooner. This book was so cute and so fun. I read the whole thing in about 20 minutes without taking even a moment’s break. The story was so unexpected and refreshing, while the art was so adorable. Zoe was the cutest lead and she was so relatable.

The book follows Zoe as she transitions from model to couch potato to pursuer of something so much bigger throughout her relationship with Thomas. I found her fairly relatable. I think Zoe represents a fairly common type of young person, she doesn’t have any particular dreams she just knows she wants to be happy and I think that’s fairly easy to relate to. I found her kind of adorable and enchanting, especially her design in the art.

There were some really unexpected twists in the plot which was fantastic. To me it seemed to have a pretty predictable arc at first, but then things really twisted around and took me by surprise, which was just fantastic. It didn’t feel out of place but like a really natural progression within the story.

I would highly recommend this book, and I’ll definitely be sharing it around with my friends.

Have you read Exquisite Corpse? Let me know your thoughts in the comments!
Check out Penelope Bagieu at her website and Twitter.
Connect with me on Goodreads, BlogLovin, and Twitter.