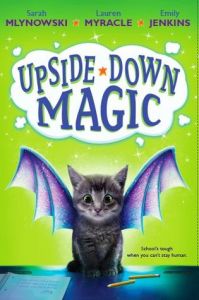 Source: Scholastic Press (A copy of this book was provided to me in exchange for an honest review.)

Nory Horace is nine years old. She’s resourceful, she’s brave, she likes peanut butter cookies. Also, she’s able to transform into many different animals. Unfortunately, Nory’s shape-shifting talent is a bit wonky. And when she flunks out of her own father’s magic academy, Nory’s forced to enter public school, where she meets a group of kids whose magic is, well, different. (Source: Goodreads)

Nory is going to start the 5th grade soon, that means she needs to test for a magic school and prove that her Fluxing abilities are good enough to get into her father’s private school. The problem is Nory’s magic has always been a little…”wonky”. When she doesn’t get into the prestigious Sage school Nory winds up at a special school for kids with Upside Down Magic. Can she prove to everyone that her magic isn’t wonky? Or will she learn that having wonky magic makes her special?

While reading this book I was a little on the fence. I thought it was cute, and the story of wonky magic was sort of adorable, but I found the story kind of slow and directionless at times. The writing wasn’t anything special, but it was certainly an easy and entertaining read. The thing that really turned me around was the last few chapters where Nory and her friend, Elliot, really illustrate how amazing it is to be different and to embrace those differences.

This book is something of an emotional journey with a focus on character development as Nory learns to accept the things that make her different from everyone else. This is a hugely positive message, and it was the constant reinforcement of this message that really changed my attitude about this book. I found the story a little slow and directionless, there were several chapters, especially early on, where nothing was happening at all. I think though, things turned out well and the pacing was much improved by the end of the book. The story is also super adorable, with cute magical abilities like changing into animals being one of the main focuses.

I found the writing pretty standard for KidLit/MG books that are similar to this. I didn’t have really any issues with it and I think it’s got a pretty good range from young kids up to middle schoolers. I found one sort of weird thing in this book, there was a huge emphasis on the colour of people’s skin, which I think was meant to point out that they’re being diverse first of all as the protagonist is African American, but also to show the ways that this magical discrimination is similar to racial discrimination. I think I had sort of an issue with it because it felt so out of place, there would have been much better ways to point out the diversity of the characters than to just say straight out “he was brown”, “she was black” because it felt a little like the writers were screaming “look at us being so diverse, aren’t we great!”

I think this is a cute and fun read, and I think the series in general will be a great one for kids to check out in the future.