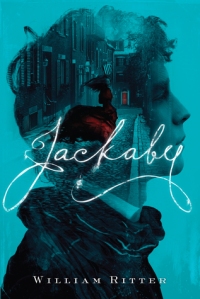 Newly arrived in New Fiddleham, New England, 1892, and in need of a job, Abigail Rook meets R. F. Jackaby, an investigator of the unexplained with a keen eye for the extraordinary–including the ability to see supernatural beings. Abigail has a gift for noticing ordinary but important details, which makes her perfect for the position of Jackaby’s assistant. On her first day, Abigail finds herself in the midst of a thrilling case: A serial killer is on the loose. The police are convinced it’s an ordinary villain, but Jackaby is certain it’s a nonhuman creature, whose existence the police–with the exception of a handsome young detective named Charlie Cane–deny. (Source: Goodreads)

Fresh off a ship from Europe, Abigail Rook meets a strange detective named R. F. Jackaby who investigates the unexplainable and the supernatural. Without any other options Abigail begins to work for Jackaby as his assistant. The pair begin to investigate a local murder which appears to have a supernatural element. They team up with detection Charlie Cane to try and track the murderer, unfortunately this investigation puts them right in the murderer’s line of sight and puts the team at risk.

Jackaby is a charming novel, delightfully mysterious and fun, with some interesting and charming characters. The book is marketed as being like Sherlock and Doctor Who, I’d say I kind of got those vibes from the book, but it felt a little like it was almost trying too hard to have that sort of feeling. I found the pacing of this book fantastic, it moved at such a perfect pace I was so enthralled and could hardly put it down. My one big issue with this book? The mystery proved too obvious for my liking, there wasn’t nearly enough twist. Overall it was really good though.

The story is told in Abigail’s perspective. I found Abigail to be cute and generally fierce, though a little overly naive. She is adventurous and represents a, fairly consistently, strong female lead for the book. Abigail becomes employed by Jackaby, who is meant to be a mix of Sherlock and the Doctor in some ways. He’s charming and mysterious, but there’s almost a sense of being forced to see him as these two BBC characters. I did really like him but he still felt like a bit of a fanfiction version of two already popular characters. The other major characters in this book are Charlie, the police detective Abigail happens to fall for at first sight (this was cute but a little eye-roll-worthy), and Jenny, the ghost who lives in Jackaby’s house. The characters are all well formed and well written, and they’re all likeable and interesting in ways that make you want more, to be able to read more about them, so I’m definitely looking forward to sequels.

The pacing of the mystery itself is done very well. You are constantly moving and learning either about the mysterious Jackaby, or about the actual murder investigation. I think things moved a little too quickly at the beginning, but that was almost necessary just to get beyond the boring backstory for Abigail (very cliched backstory for her, but there isn’t really much else you can do with a Victorian lady I suppose). Things wrapped up well, at a good pace, though once the mystery was solved it did seem to drag a bit as the characters had to be set in their rightful places and so on.

Speaking of solving the mystery…it was so obvious the whole time. Frustratingly obvious. So obvious I was like “it has got to be something else, there has got to be some other twist.” And, no, there wasn’t. This was a huge point of disappointment for me in an otherwise charming and fun read.

Overall, I would recommend this book and I am looking forward to reading the sequels!

Have you read Jackaby? Let me know your thoughts in the comments!
Check out William Ritter on his Goodreads.
Connect with me on Goodreads, BlogLovin, and Twitter.