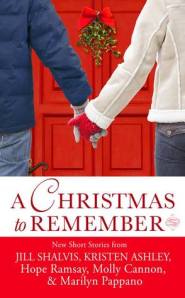 Title: A Christmas to Remember

Source: Forever (Grand Central Publishing) on NetGalley (A copy of this book was provided to me in exchange for an honest review.)

Curl up with this heartwarming Christmas collection!

Jill Shalvis, Dream a Little Dream: Melissa has kept every man at a safe distance-especially firefighter Ian, a sexy friend with sexy benefits. But Ian secretly longs for more. Luckily, ’tis the season for giving love a chance . . .

Kristen Ashley, Every Year: Holidays don’t come easy for Shy and his brother, Landon. But with the magic of Christmas, along with a little help from Tabby and her family, the Cage brothers are about to get the gift of a lifetime . . .

Hope Ramsay, Silent Night: Down on her luck and evicted from her apartment, single mother Maryanne hopes to start over in Last Chance. When the snow begins to fall, it looks like her baby might literally spend Christmas Eve in a manger. And Maryanne might celebrate the holiday with a handsome stranger.

Molly Cannon, Have Yourself a Messy Little Christmas: Lincoln is a bachelor who’s set in his ways-until a professional organizer dressed up as Mrs. Claus changes his life, one tip at a time. . .

Marilyn Pappano, A Family for Christmas: War widow Ilena doesn’t mind spending Christmas alone. But when a new doctor blows into town with the winter wind, will she get her secret Christmas wish? (Source: Goodreads)

This Christmas themed anthology is a series of romance stories by popular romance authors. They stories all come from ongoing series (none of which I’ve read). The book also features excerpts from other books by the authors. I found that the stories made sense even without having read the series, so that’s a good thing.

I didn’t particularly enjoy this book, it wasn’t bad, it was just sort of bleh. I enjoyed some of the writing, and found some of it painful. I liked the concepts of all of the stories, which worked well and felt appropriately festive. However, it just felt a little flat, uninspired, and often had some bits that just ruined any good stuff in the stories.

Before each story was a letter from the author thanking fans but also introducing the story, and talking about the author’s personal experiences with the holidays. Very personal stuff. After each of the stories was an excerpt from other books by the authors. I didn’t read these excerpts because, in the cases where I tried, I had no idea what was going on. I don’t read any of the series these excerpts come from, so they didn’t make sense to me. However, if you do read them I’m sure they were a real treat.

I had some problems with the layout of the book. I think it was a little weird that each story was so cordoned off from the other’s with the intros, dedications, and excerpts. It made it feel like they tried super hard to fit a bunch of books into one book, instead of a series of short stories that were themed to match. It just created a lot of separation instead of cohesion. If I think about something like My True Love Gave to Me (my review here) I can remember the cohesive feeling. Everything went together and fit into place. The stories were separate things, but they felt like they were meant to be together. This book really didn’t feel like it fit together.

I’m going to break this down by story, in the order than they appear in the book.

Ian’s always been in love with Melissa, but she broke his heart and left him months ago. Now, just as Christmas approaches, Mel’s life is in danger and Ian steps up to save her. This near death experience makes Melissa realize what she’s been missing. I found this story kind of fun, but a little disappointing in the end. The set-up, the heart broken fireman, really worked for me. I liked this idea. I also thought the idea of Melissa’s near-death experience making her realize what she was missing was great. I also felt the characterization was fairly good in such a short period of time, not great but good. What I didn’t like was that she proved she was different, and willing to truly love him, by having sex with him. I get that it’s a romance novel, there’s going to be a little smut, but (!!) it just ruined the feeling that was building up in the story. Other problems were some inconsistencies in story, and some really bad cliched lines and character tropes. This wasn’t bad, I didn’t really like/love it, it was just OK.

“Every Year” by Kristen Ashley

Tabby’s brought her boyfriend, Shy, and his brother, Landon, to her family Christmas. She hopes to give them a little cheer in a season that holds no happiness for them. I found the action in this one a little more sensible, the sex scenes generally fit into the story as there was more of a sexual relationship that made sense. I found the earring gift really beautiful, and meaningful. I did find the sex repetitive and bland though. I also found the second one super unnecessary. The writing style was not something I enjoyed as the phrasing was weird, repetitive, and often super awkward. One of the absolute worst things about this story, and I really hope this isn’t the case in the actual series, is that she never calls Shy by his name, it’s always “my man”. This could get repeated several times in a sentence. It’s so obnoxious. The characterization they all lack is basically filled in with this obnoxious phrase which makes them all seem horribly annoying. There was also this attitude of women being “bitches” and “catty” which just made me groan. This one was more in the range of “bad” for me, mostly because that whole “my man” thing made the reading experience difficult and annoying.

Maryanne and her son, Joshua, are looking for family in a place she hasn’t been in 20 years. What they find in Daniel Jessup is a family, just not the one they expected to find. This love story about miracles is just about the perfect story for the Christmas season. I found the story between Maryanne and Daniel cute and romantic, the sweetness of their interactions was excellent. The writing was probably some of the best in the book, with well developed characters in a short piece of writing. I really liked how this was inspired on Silent Night and the story of Jesus’s birth, it made the story fit seamlessly into the Christmas feeling this book is meant to inspire. I would have given this book an extra star, however, I found some phrasing odd or uncomfortable so I wound up knocking a star. The thing that is especially bad is the amount of cliches and stereotypes relied on in this story. However, have no doubt, this is an adorable story.

“Have Yourself a Messy Little Christmas” by Molly Cannon

Lincoln’s mom hires an organizational helper for Christmas. She, Dinah, is meant to help him clean up the house, set up for Christmas, and help him de-stress before his parents come home for the holidays. I found this story cute. I thought the relationship that was built up at the beginning of the story was adorable and really worked well. At some points this story made me think of Stephanie Perkins’ “It’s a Yuletide Miracle, Charlie Brown” from My True Love Gave to Me, there were definitely some similar elements. The character development was pretty good, and served as a good introduction to Dinah and Linc. I think the part of this that really killed where it was headed was the sex scene. I know, I’m started to sound super against sex scenes, but I’m not…if they’re used well. This wasn’t. It just happened with no amping up and it really didn’t make any sense to happen when it did, it basically just felt like Cannon felt obligated to have a sex scene and threw one in randomly. It just let me down and really took away from a story that was developing really well up until that point. It was cute, but it didn’t reach the potential it had.

“A Family for Christmas” by Marilyn Pappano

Jared moves to a small town and opens a pediatric clinic to prove a point, and to take a stand against his overbearing parents. He meets overly festive Ilena and her son, John, there and falls head over heels for them both. This leads him on a path to figuring life out, is he done proving points? Is he ready to commit? I enjoyed this story for the most part. I found the writing to be well done. I thought the initial relationships building was really great. This is a case where the sex scene wasn’t necessary but it didn’t stick out like a sore thumb either. What I had a hard time with was the degree of commitment that occurred in such a short amount of time, because it didn’t make sense in context. This story is about a woman whose husband died, leaving her widowed and pregnant, and a man who is incapable of commitment…you don’t wind up so deeply committed so quickly and expect that to seem believable. I was going to give this more stars but the ending really killed any chance of that for me.

Overall, I just found the book flat. Nothing stood out, which means I can’t recommend it.