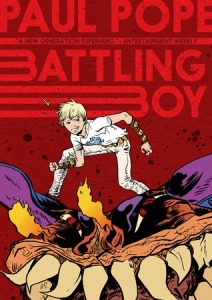 Monsters roam through Acropolis, swallowing children into the horrors of their shadowy underworld. Only one man is a match for them–the genius vigilante Haggard West.

Acropolis is desperate, but when its salvation comes in the form of a twelve-year-old demigod, nobody is more surprised than Battling Boy himself. (Source: Goodreads)

This comic book is set in Acropolis, a huge city overrun with violence and monsters. Their greatest hero Haggard West is killed by a local gang leaving the city unequipped to defeat the monsters. In comes Battling Boy, a God from another world, who takes the place of the hero and fights to save the city as part of his coming of age tests.

This book was really amazing. I was a little tentative to read this because the art isn’t really my usual, prefered style. I tend to lean towards a cuter, cleaner style. This was amazing though, and I think the style fits the grittier content of the comic. The story is really interesting and the content just hooked me as soon as I started reading it.

Battling Boy is a God, which really surprised me. I didn’t know what exactly he was going to be, or what the book would be about. He definitely seems to have been influenced, in terms of character creation, by the Greek/Roman Gods and other pantheon style Gods. I am a big fan of the Greek Gods and content about them so this was a huge plus for me.

Further to this, Battling Boy wears these t-shirts that summon powers of great beasts/animals. There are 12 of them, which really calls up the Chinese Zodiac (think Jackie Chan’s old zodiac TV cartoon), and using the t-shirts allows him to use their powers, strengths, and weaknesses. I think this was such an interesting idea and I’m really intrigued to see how this continues to play out in future comic books.

I know it already sounds like a lot of stuff. Pope has combined pantheon Gods, monsters, and Zodiacs into one comic book. He does it so well though! The story all fits together and combines elements of so many popular hero/monster/God stories to make this amazing story for kids, young adults, adults, everyone really.

The art style as I noted before is a little different than my preferred style. It’s a little rougher, a little more on the superhero comic side. Combined with the content of the story, the street gangs and monsters, it reminded me a little of Batman Returns with a little less of the grit that makes that comic so terrifying. (It makes sense because Paul Pope has worked on Batman comics and other super hero comics before.) That only serves to make it a little more appropriate for a younger audience. This is really a great art style  for the particular content of the story.

In terms of characters I found Battling Boy and Aurora West really interesting. They’re young, Battling Boy is only around 12 and Aurora’s a little older, which means they’re both still kind of in the “training” phase of their lives as future heros. Battling Boy is undergoing this coming of age journey to become a hero where he’s sent away to perform a heroic act (very reminiscent of old Greek heroes) and Aurora has been trained to be her father’s successor. It was great to see both some strong younger heroes but also strong females. Aurora and her mentor are both strong female characters and I’m excited to see them in future books, especially as the next book (a prequel) is called The Rise of Aurora West.

The one bad thing about this book? It’s too short! I found that not enough had happened by the time I finished, and I wished the story had been longer. Of course it’s not a standalone so there is more coming, but it just felt like not a lot happened and there was a very abrupt ending to the book.

That being said, the book was amazing and I’m really happy that I’ve picked it up. I think this book can serve as a good introduction for younger audiences to comic books/graphic novels because it kind of bridges the gap between super hero comics and other more literary graphic novels just because of the content of the book. I highly recommend this for not just kids though, because it definitely has enough grit for an older comic book reading audience. Now, I just need to get my hands on the prequels!

Have you read Battling Boy? Let me know your thoughts in the comments!
Check out Paul Pope at his website, and Twitter.
Connect with me on Goodreads, BlogLovin, and Twitter.