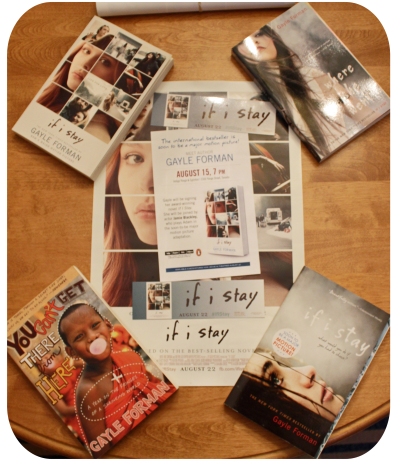 This weekend I got to meet Jamie Blackley and Gayle Forman for a signing of If I Stay as part of the press tour for the upcoming movie. This event, hosted by Chapters, was so exciting for me. I’ve previously met Rainbow Rowell to get Fangirl signed and I was so excited to meet Gayle and Jamie because I really love their work. So for this, very special, post I wanted to share my experience with everyone.

So, I’ve been following the press tour, kind of, on Twitter. I knew that a lot of the events had hundreds of people and the lines were crazy long. Because of this my mom agreed to take a half day off of work and we drove into the city at noon. We got to the store at 3:30. I was really pleased to find that Chapters staff were handing out numbers for groups of 20. I want to thank them so much for this because it made things so much smoother and easier, especially for people like myself that arrived so early. I was in Group 1, so I was one of the first 20 people at the store for this event. It’s a bit embarrassing, but I was really excited for this, and wanted to make the drive home at night easier by being earlier to arrive. 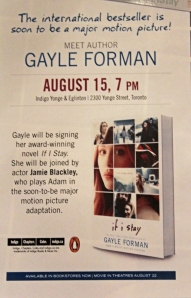 This is the little announcement flyer from the event.

So after waiting for all that time, Gayle and Jamie arrived around 7. They came out and did a Q&A, with some pre-selected questions and some audience questions. I was too short to take any pictures, so unfortunately I don’t have many pictures of the signing, though this will get a little photo heavy at the end. 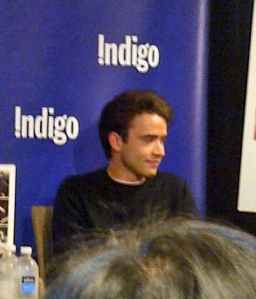 A really crummy photo of Jamie over someone’s head.

I think I was about 10th in line. Which was totally nerve racking because I had no idea what I was going to say when I got up to the table for my books to be signed. While waiting in line I also met some really cool people who I’m glad to have met and shared a little time with while we waiting for the event. Gayle Forman, bringing people together through her awesome writing.

Gayle explaining about her first book. I apologize for how orange this is.

When I got up to the table I was pretty much shaking from nerves. After they greeted me, totally starstruck from meeting my idol (Gayle) and the too attractive Jamie I just rambled, without giving them room to reply, “Jamie, I really liked We Are the Freaks and Vinyl. And Gayle, thank you for existing because your books are just so life changing and mean a lot to me.”

Jamie looking at You Can’t Get There From Here

They were really nice!!! They were very sweet and thanked me for the compliments. I had brought Gayle’s first book You Can’t Get There From Here to be signed, which really seemed to surprise her. Jamie was also interested in it and checked out the description on the back. This was both awesome because they actually noticed me a little more, but also super embarrassed because it got me attention.

Either way, it was amazing. The two of them were so sweet to everyone, and were really friendly. My mom went up and got some books signed and they were so nice to her and she had a great time too.

Here at pictures of the books and stuff they gave out at the signing:

So this one you might’ve already seen in my Stacking the Shelves post this weekend. This is the movie tie-in edition of the book.

This is the regular edition of the book. Gayle wrote “All the Feels” next to her signature. 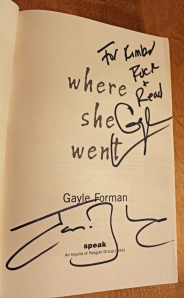 This is Where She Went. Gayle wrote “Rock and Read” next to her signature, unfortunately it looks like “F–k and Read”. But still, super nice. 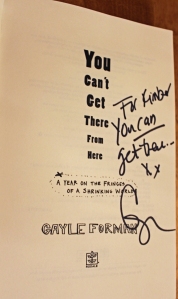 Finally, my copy of You Can’t Get There From Here. Gayle wrote “You can get there”. This is probably, despite not being signed by Jamie, the best signed book of them all. I am really glad I chose to take this book because I think it was really great to have her sign one of her earliest books.

After you got your book signed they gave you these book marks, which I will never use because they’re too precious.

And…you also got a poster! This will definitely be going up on my wall. I have a spare, so when I move for university I’ll take that one for my apartment.

Sorry for the excessively crappy pictures, my assistant wasn’t around to help and I was trying to get this post out quickly.

I really want to thank Chapters for hosting such an amazing event. I think it went really smoothly, and was really well organized. Also a huge thank you to Jamie and Gayle for taking time to come to Canada and for being so amazing to everyone at the event. ALSO, HUGE HUGE HUGE thanks to Penguin Canada who have just given me tickets to a prescreening of If I Stay on Wednesday (tomorrow at the time of writing this).

Were you at this event? Let me know in the comments!
Check out Gayle Forman on Twitter.
Check out Jamie Blackley on Twitter.
Connect with me on Goodreads, BlogLovin, and Twitter.